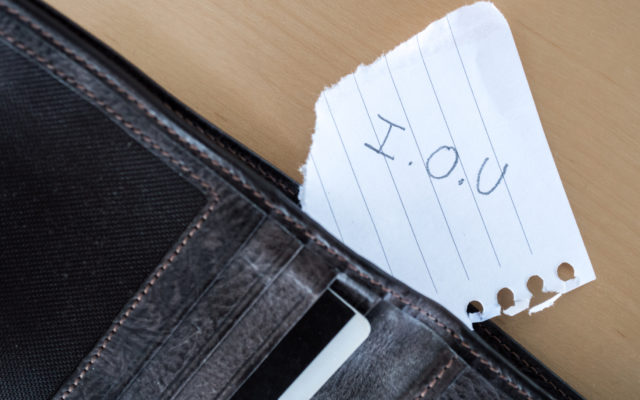 Yesterday I went to Street Toyota to get an oil change and a state inspection. I don’t like sitting around just doing nothing so I decided to take Cindy out to eat while they worked on my car. I told her pick a place in that area to eat. She said she didn’t know where to go because we rarely eat out. This is true because I cook all the time. I figure I can get the portions I want and it doesn’t cost me and an arm & a leg for what I can buy three meals for at home. We decided to eat at Applebees. We sat at the bar and watched the Texas-TCU game and ordered the loaded fajitas. Cindy had the chicken and I had the beef. I had a couple of adult beverages and Cindy ordered a beer. The guy behind the bar Michael asked if I wanted another drink and I said no that we were ready for the bill. That’s when panic set in. It wasn’t the cost of the bill. I didn’t have my wallet. When I patted my pocket I knew exactly where my wallet was it was on the bed at home.

I didn’t know what to do. Will Michael and the manager believe me when I said I’d come back and pay my bill. I couldn’t leave my driver’s license it was in my wallet. I didn’t have a business card. They’re in my wallet. Could I leave my phone and come back? The phone could have belonged to anyone. There was a customer there that knew me. Do I ask to borrow money and pay her back? Lucky for me Cindy had enough money to cover the bill. Cindy said it was a good thing I didn’t order another drink we would have paid the bill without having tip money. We tip well because both of us have been in the service business. Was I trying to pull an Allen on Two & A Half Men and get out of paying the check? Do I go hide in the bathroom? Do I call a friend? Do I call Lani? All she has is small bags of Haribo-Gold Bears. They never knew at Applebees I forgot my wallet. It was just one of those things. We had to go home to get my wallet because I still had to pay my bill at Street.

Have you ever been somewhere and realized you left your wallet at home? I have left my phone at home and said I’ll get it later it’s no big deal. The wallet on the hand is a big deal.