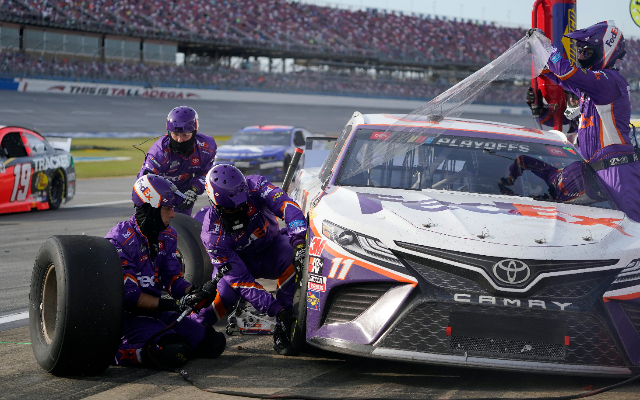 With the Cowboys, Longhorns, Sooners, and Aggies all losing last weekend, chances are it was already a frustrating weekend if you’re a sports fan in the panhandle… then it all hit the fan for NASCAR in Talladega.

We, as fans probably should’ve seen the writing on the wall after championship contender Joey Logano was penalized not once, but twice for forcing another car below the double-yellow line (which is out-of-bounds at super speedways), a penalty that almost never gets enforced by NASCAR. The building frustration of a race that set a new record for cautions (13, that’s two more than the record) finally came to a head in the last lap of a third overtime finish when, with cars wrecking all over the track (like any super speedway race these days), Denny Hamlin dropped to the apron (out-of-bounds, remember?) to pass several cars and cross the finish line just ahead of stock car racing’s “Cinderella,” Matt DiBenedetto during a time when he’s waiting to find out if he’ll even have a job next year or be replaced with Austin Cindric.

After viewing the evidence, NASCAR decided not to take the win away from Denny Hamlin, but instead to take second away from DiBenedetto for forcing a car to the apron and also to do the same to Chase Elliot. Hamlin did his best to downplay the passes on the apron during his post-race interview while the crowd of 15,000 fans booed and chanted “Matty D,” (which you can hear about 3:00 minutes into that video). Later that night, the Elliot penalty was reversed, and the same penalty was issued to Chris Buescher, so Elliot finished fifth, Buescher outside of the top 20.

The wording is important here. The rule reads: “If in NASCAR’s judgment, you go below the double yellow line to improve your position, you will be black-flagged. If in NASCAR’s judgment, you force another car below the double yellow line, you may be black-flagged.” (Thanks Jeff Gluck on Twitter for the rule clarification) So by NASCAR’s rules, whether you’re forced to the apron or not, advancing your position (like Hamlin did) once you’re there is illegal, no judgement call required.

Why NASCAR chose to ignore their own rule is puzzling, to say the least. The common idea on social media is that it’s favoritism towards the driver who’s bringing Michael Jordan (and his money) into the sport on the week that they announced their purchase of a cup series team. While I’d like to think that NASCAR wouldn’t do something like that at the expense of a fair race, even I have to admit that there’s no other explanation behind what happened Sunday, unless NASCAR doesn’t know their own rules.

Dale Earnhardt Jr. and Dale Jarrett both spoke openly on the broadcast about the need to do away with the out-of-bounds rule to avoid this kind of controversy all together in the future. As Junior said, “We’re not gonna wreck any more cars than we did today,” and I’d have to agree, considering the new record being set for cautions. Judging by the tremendous backlash on social media, this is yet another example of many NASCAR fans asking themselves “why do I even bother watching this crap anymore?”