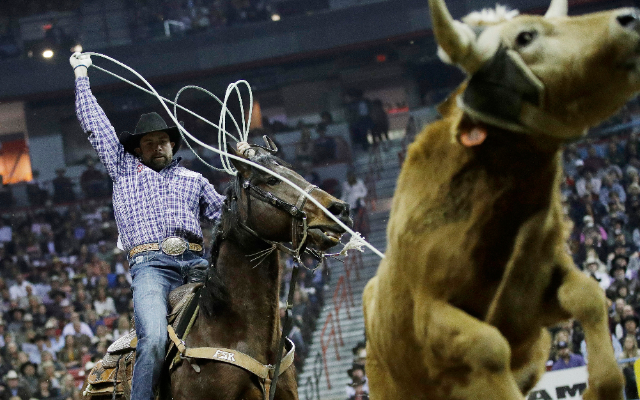 Well this is surprising! When I heard earlier this week that the Wrangler National Finals Rodeo was leaving Vegas this year for Arlington I naturally assumed that meant AT&T Stadium (ya know, ’cause there’s already a rodeo there every year now, and Jerry Jones has a tendency to fork out the big bucks for events like this). But I guess the Texas Rangers organization beat Jerry to the punch this year, because instead the NFR will be held in the Ranger’s shiny new ballpark, Globe Life Field on December 3-12. Ironic isn’t it, that people might get to sit in the stands for a rodeo at the new ballpark before they get to take in a baseball game there?

So here’s the important stuff you’ll need to know if you plan to attend:

-Tickets will go on sale to the general public on September 25 at TexasRangers.com/NFR.

-Due to social distancing, all tickets will be sold in groups of 4 with space between groups… not 1 ticket, not 2, not 6. Only 1 set of 4 tickets.

– Tickets are only available as a complete package for all performances (total of 10), Not a single event, but all 10.

– All tickets will be delivered digitally. You can find more about how that works right here.

They haven’t announced a ticket price yet, but because you’ll have to buy a minimum of four seats to all 10 events, expect it to be high (probably in the $2,000 range). But, if you can afford to go it should be a really cool event, especially considering that they’re planning to take the show back to Vegas again next year. They’ll have a fence across the outfield, and the whole infield will be filled to make the arena. You can check out the PRCA’s whole announcement right here.